Three recent cases highlight why you should encourage your employees to use their holiday entitlement.

The purpose of Article 7 of the Working Time Directive (2003/88/EC) (the WTD) is to ensure that EU Member States implement domestic legislation that grants workers entitlement to paid annual leave of at least four weeks per year. Article 7 also states that paid annual leave cannot be replaced by payment in lieu – except where the employment relationship is terminated.

Kreuziger v Land Berlin and Max Planck v Shimizu: In these separate cases, the claimants were seeking to be paid in lieu of untaken annual leave on the termination of their employment. In Mr Shimizu’s case, he was claiming payment in lieu for untaken holiday entitlement for the current year as well as the preceding year.

Stadt Wuppertal v Maria Bauer and Volker Willmeroth v Martina Brobonn: In both cases, the claimants were the sole heirs to the estates of their late husbands who had died while in employment. They were claiming payment in lieu for annual leave entitlement that their husbands had not taken before their deaths.

In all three instances, the ECJ have emphasised the importance of paid annual leave as a principle of EU social law from which there may be no derogations. The ECJ also reiterated the aims of the WTD and Article 31(2) Charter of Fundamental Rights of the European Union (the Charter) being to ensure that workers have sufficient rest from the work they do in their jobs and to have a period of relaxation and leisure.

On termination of employment, including when terminated by the death of the employee, domestic legislation should not provide for automatic loss of annual leave entitlement. The employee, or the heir to their estate, should be entitled to payment in lieu for any such untaken annual leave.

Annual leave entitlement from an earlier leave year is not automatically lost just because the employee failed to request to use it. To be able to show that payment in lieu for such leave is not owed to the employee, the employer must be able to demonstrate that they provided the employee with the opportunity to take the leave and made them aware of the circumstances under which the entitlement would be lost.

The findings suggest that untaken annual leave may not automatically lapse at the end of the holiday year, raising the possibility that on the termination of employment, an employee might be entitled to be paid in lieu of their total accrued entitlement (whether accrued in the current or previous leave years).

For the entitlement from earlier leave years to lapse, employers need to be able to show that they have provided their staff with the opportunity to take their paid annual leave. What exactly would qualify as sufficient ‘opportunity’ is not totally clear, however the ECJ noted that employers are required in particular ‘to ensure, specifically and transparently that the worker is actually given the opportunity to take the paid annual leave… by encouraging him, formally if need be to do so while informing him accurately and in good time…and that if he does not take it, it will be lost.’

We would therefore recommend that employers ensure through their policies and HR systems that employees are aware of the need to take annual leave in the leave year it arises, any policy on carry over and  the procedure for booking and taking that leave. We would also recommend including a reminder of the consequences of not taking their annual leave entitlement in these communications.

Employers may choose to have a policy that requires employees to use up accrued holiday after notice of termination has been served. Whether such leave is actually taken will still need to be monitored. These decisions will only apply in respect of the four weeks annual leave granted under the WTD and implemented into domestic law by the Working Time Regulations 1998 and will therefore not apply to the extra 1.6 weeks granted under the Regulations and any contractual holiday entitlement over and above this. 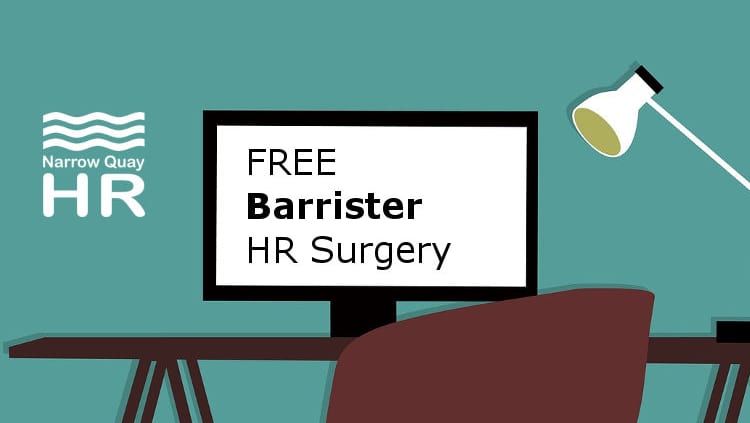 Do you have an HR issue you need to tackle?

We are sorry to report that this event has been postponed. If you have a HR issue you would like to discuss, please do get in touch.

We understand that dealing with HR issues can be time consuming and that it can be costly when things go wrong.

Our HR surgery is an opportunity for you (or someone suitable from your Chambers) to sit down with one of our HR experts and discuss a specific HR concern. It might be anything HR related from a tricky performance management issue, a breakdown in a working relationship, employee development or rewards and benefits.

You are invited to attend our first HR Surgery.

You will receive 30 minutes free HR support to help you find a solution. This service is exclusive to Barristers and the Chambers within which they operate and builds upon Narrow Quay HR’s partnership with The Bar Council

Who is it suitable for?

Is it Unfair for an Employer to Withhold Evidence From a Disciplinary Panel?

On the facts in the recent case of Hargreaves v Manchester Grammar, it wasn’t, but this decision should be followed with caution.

Mr Hargreaves had been employed by Manchester Grammar (School) as a teacher since 1 September 2005. In March 2016 a pupil (Pupil A) alleged that Mr Hargreaves had grabbed him, pushed him against a wall and put his fingers to his throat. Prior to the allegation from Pupil A, Mr Hargreaves had not been subject to any formal disciplinary action.

As part of an investigation into the allegations, various pupils and teachers were interviewed. Two pupils corroborated Pupil A’s account and one teacher noted that Pupil A had appeared upset when reporting the incident. However, two other pupils who were interviewed had no recollection of anything unusual.  When the investigating officer interviewed the two teachers named by Mr Hargreaves as potential witnesses, one said she had not been in the area at the relevant time and the other said she had not seen anything unusual. The evidence of the pupils and teachers who had seen nothing were not presented to the disciplinary panel or Mr Hargreaves.

Following the hearing, Mr Hargreaves was dismissed for gross misconduct on 17 June 2016.

Mr Hargreaves brought a claim of unfair dismissal to the Employment Tribunal (ET) and the ET found his dismissal to be fair. Mr Hargreaves appealed to the Employment Appeal Tribunal (EAT) on the basis that, taking into account the career-changing impact of the allegation, the ET had erred in respect of the significance of the evidence gathered from those who had reported seeing nothing unusual.

Mr Hargreaves argued that if Pupil A’s allegation was true it would be highly likely that someone in the vicinity would have noticed whereas, if his account of events was true, those close by would not recall seeing anything untoward.

The EAT dismissed the appeal, holding that it was within the band of reasonable responses for the School to decide not to put forward the evidence of the witness who had seen nothing and to dismiss Mr Hargreaves.

The EAT commented that in investigating the incident it wasn’t that the School had not pursued lines of inquiry, it was that they had found that those lines did not have anything to add. The statements given by the witnesses had been considered and the School had reasonably concluded that the evidence  was immaterial and could not assist either the Claimant or the disciplinary panel.

While this decision provides some comfort to employers who have properly assessed the evidence gathered during investigations and decided that some is not relevant, we would still advise that it is in an employer’s interest to present all evidence. Choosing not to do so creates an unnecessary risk of litigation and a finding of unfairness.

This approach is in accordance with the ACAS Code of Practice on disciplinary and grievance procedures, which provides that in conducting a disciplinary hearing it would normally be appropriate to enclose copies of any written evidence, which may include any witness statements, with the hearing invitation.